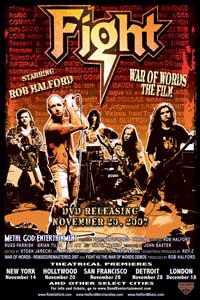 After nineteen years, more than a dozen global concert tours and dozens of gold and platinum awards as the defining vocalist of Judas Priest; Rob Halford departed the band in 1992 to pursue a solo career immediately releasing ‘Light Comes Out Of Black’ supported by members of Pantera. The track rocketed to the top of radio playlists, and later that summer Rob would assemble his own band ‘Fight,’ and place most of its new tracks from ‘War Of Words’ in heavy-radio rotation while aggressively ushering in a new sound for the Metal communities.

Metal God Entertainment is proud to debut the Theatrical and DVD releases of ‘Fight War Of Words – The Film,’ a Documentary and 5.1 Concert featuring the songs and performances of Rob Halford’s first solo band ‘Fight.’ www.RobHalford.com/trailers

Rare audio and film footage of Fight’s earliest concert performances in Europe, United Kingdom, USA, Mexico and Japan have been restored. Stereo and 5.1 Dolby surround mixes have been produced by Roy Z. 5.1 Dolby surround encoding and mastering for DVD and The Metal God’s Theatrical Premiers handled by industry giant Technicolor.

The screams are more mesmerizing than you thought possible. Fight is un-mistakably Rob Halford at his finest. Power chords engulfed by ferocious vocals; exacting prose driven by an astonishing young group of musicians.

‘Fight War Of Words – The Film’ will Theatrically Premier at 5.1 Dolby Surround Digital Cinemas in:

Tickets may be purchased at: www.DandEEntertainment.com  on 11/2/07.

Rob Halford will attend select premiers for a 30 minute conversation on the assembling of Fight and songs written for ‘War Of Words.’ Tickets are limited for this rare opportunity to experience ‘Fight War Of Words – The Film’ in 5.1 Dolby Surround Digital Cinema and participate in a rare conversation with The Metal God, Rob Halford; as he relates his experiences of his first solo band.

Movie-sized posters of ‘War Of Words – The Film’ will be distributed to all in attendance after the performance.

K5 – THE WAR OF WORDS DEMOS

Rob and Halford Guitarist Metal Mike Chlasciak will appear and sign ‘new product only’ at FYE in Manhattan on Thursday, November 15, 2007 12 pm.

Rob Halford is uniting the original members of Fight: Brian Tilse, Russ Parrish, Jay Jay and Scott Travis in Hollywood, California at 5:00 pm Tuesday, November 20, 2007 for an exclusive autograph session of ‘new product only’ at

Visit www.RobHalford.com/Fight  on 11/5 for more details.

Fight will also be in attendance for the Theatrical Premier of ‘War Of Words – The Film’ at Mann’s Chinese Theater in Hollywood, CA 8:00 pm on 11/20.

Tickets may be purchased at: www.DandEEntertainment.com  on 11/2/07.

Rob Halford and members of Fight will participate in a world-wide chat December 2007. Details available 11/5 at: www.RobHalford.com/chat