IDW Publishing and Hasbro bring TRANSFORMERS and G. I. JOE Comics to the iPad™

IDW Publishing and Hasbro are proud to announce that TRANSFORMERS Comics and G.I. JOE Comics applications 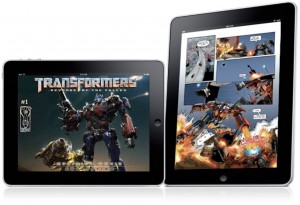 are available now on the Apple iPad. Taking full advantage of the iPad’s full-screen, full-color capabilities, the apps will offer the next level of reading experience to fans. The free IDW iPad storefront apps each include three free comics with the initial download, and offer more comics as in-app purchases. Fans can browse nearly 200 comics for their favorite story lines, such as movie tie-ins, ongoing series or even classics from the 80s.

“The iPad is a wonderful format for comics, as the screen size is close enough to the print size that readers  full-page display that showcases the eye-catching art and vivid stories. IDW has developed several new features to enhance the comics and take full advantage of the iPad’s capabilities, including pinch-zoom abilities and single- or two-page viewing options.

“Both G.I. JOE and TRANSFORMERS stories have such a broad appeal and have been gaining steam with the core readership, that pushing them to the front of the iPad store just made sense,” says Andy Schmidt, IDW Senior Editor on both franchises. “These are not just great apps and a great reading experience, these are great stories with beautiful artwork.” 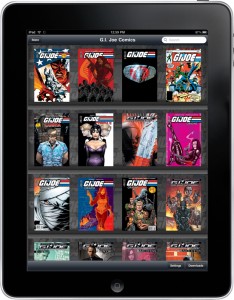 “The great comic book legacy of TRANSFORMERS and G.I. JOE continues in a new and exciting way with these new cutting edge applications for the iPad and other digital platforms,” said Bryony Bouyer, Senior Vice President of Entertainment and Licensing at Hasbro.  “We’re thrilled to be able to deliver classic characters such as OPTIMUS PRIME and SNAKE EYES to comic fans around the world via IDW in a variety of formats.”

IDW was the first comics publisher to launch its own “in app purchase” storefronts for the iPhone and iPod touch with a variety of applications. The company also offers the IDW Comics app, which collects the entire IDW digital catalog, including TRANSFORMERS, G.I. JOE and many other titles. All IDW comic shop apps are powered by iVerse (http://www.iversecomics.com/).

TRANSFORMERS and G.I. JOE comics are currently available for the iPad, iPhone and iPod touch through the App StoreSM.

Visit IDWPublishing.com to sign up for updates and learn more about the company and its top-selling books.