Premier publisher at the forefront of digital distribution 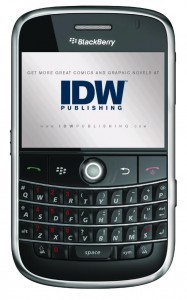 Starting this week, BlackBerry users can begin enjoying IDW’s huge comics catalog. IDW’s BlackBerry debut features the Star Trek: Countdown graphic novel. The company’s most popular titles then will continue to roll out on a weekly basis. TRANSFORMERS: Revenge of the Fallen, Star Trek: Movie Adaptation and G.I. JOE: The Rise of COBRA will be among the first to release over the next few weeks. Each is available as an individual application, with more titles added each week.

“We’re excited to bring our comics line up to BlackBerry users,” stated Jeff Webber, IDW’s Director of ePublishing. “Each BlackBerry app collects an entire series into an individual graphic novel, and people can sample part of the story before they decide to purchase. With BlackBerry, we’ve expanded the audience for our digital comics to include users of one of the largest mobile platforms in the world.”

Proud to be the first major publisher of comics available to BlackBerry users, IDW’s applications fully leverage the capabilities of BlackBerry devices to deliver the highest quality user experience. Each IDW comic features panel-by-panel viewing and scroll bar navigation, plus built-in news feeds that bring fans all the latest IDW news and updates.

For the BlackBerry comic applications, IDW partnered with Sweet Caesar, a premier BlackBerry developer. “We have work closely with IDW to bring the world of digital comics to the BlackBerry platform and to deliver the best possible user experience”, said Bogdan Chmielewski, Sweet Caesar’s Chief Technology Officer. “We are looking forward to working with IDW on upcoming titles and continuing to enhance the application based on consumer feedback.”

Since the BlackBerry App World is accessible from most BlackBerry phone, IDW’s comics catalog is now available to a huge new audience, and is no longer limited to certain carriers.

IDW comics are currently available through the BlackBerry App World.

Visit IDWPublishing.com to sign up for updates and learn more about the company and its top-selling books.