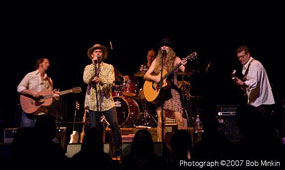 Lauren & Judge and band have been very busy this winter doing what Lauren calls “heavy construction”; working, molding, choppin’ & wood sheddin’ new compositions for their upcoming recording sessions at Hyde Street Studios in San Francisco, Ca. This new material is bawdy , yet poignant,with some truly off handed subject matter; insane asylums’, a train to hell, golden rolling hills, house levelers, and hired hands all appear in Lansdale Station’s landscape through Americana. Noted for their powerful simpatico vocal harmonies, this group expresses a deep soulful commitment to the material, as well as an understanding of humanity.

All this is served up by a 5 foot 10 leggy Louisiana blond, a strapping mustached blues man, and their band of men that look like Billy the Kids’ Gang. Big Ed Michaels (Roy Rogers / Alvin Youngblood Hart) is rockin the drum chair with his explosive percussive talents. Lansdale Station is also charged about the return of Jim Cucuzella on slide guitar. “Jim is a fabulous slide guitar player that can roar like a chain saw, or shoot you out the stratosphere. He’s become one of the most proficient slide players in the area, & rivals anyone that you’ve seen,” says lead vocalist Judge Murphy. “It’s great to have him back w/ the band.”

For those classic Lansdale Station &/or Judge Murphy/Zero fans, you’ll also get your full helping of the Robert Hunter material,’ End of the World Blues ‘,’Catalina’, and ‘Home on the Range’. Either way, this will be a night not to miss, with a little somethin’ for every kind of music lover. Get it while you can, Lansdale Station is performing very few shows during their recording process.

Rancho Nicasio is one of the few surviving great venues in Marin Co. and is a fabulous hall to catch this act. Known for hosting only the cream of the crop of both local and nationwide touring acts (Asleep at the Wheel/Del McCoury/ Van Morrison/ Billy Joe Shaver/ Tea Leaf Green/ Maria Muldar), it’s only “25 minutes from everywhere”. This historic roadhouse,established in 1941, is situated in the geographical center of Marin County. The Rancho Room is a place where you can tear it up or mellow back. Their American Cuisine offers dining with crisp, white linens & soft lighting that illuminate each table. Wall sconces & a lighted wagon wheel adorn the large, wooden dance floor, making for warm acoustics. The original brick fireplace adds to the Rancho Room’s unique ambiance. French doors lead out onto the Rancho Room deck, brick patio and lawn area, if you decide to have a look at the stars or stroll about their 5 acre property.

TICKET GIVEAWAYS to be offered on air by The Krush Wine Country Radio &
KWMR of West Marin. Check them at: http://www.krsh.com and http://www.kwmr.org

**please note as Lansdale Station is currently in studio for their next
Cd, live performances are limited during this time.
Photo by Bob Minkin http://www.minkindesign.com/photo/

This entry was posted in FrontPage, Music. Bookmark the permalink.
Login    •     Contact    •