BUSHMAN Sings The Bush Doctor: A Tribute to Peter Tosh 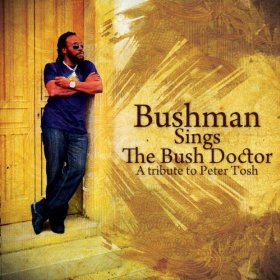 Born Dwight Duncan in St. Thomas, Jamaica in 1973, Bushman started his professional career in his teens as an acclaimed selector/ vocalist (Junior Melody) with the Black Star Line sound-system.  Moving to Kingston to further his opportunities, he met Steely & Clevie, who were so impressed with his talents that they encouraged him to change his name to Bushman and record his first singles, Grow Your Natty and Call The Hearse.  The success of these singles led to a record deal with Greensleves and the 1997 release of his first album, the now-classic, Nyah Man Chant.  He has ten albums to his credit, including Total Commitment and Higher Ground, which were recorded with veteran producer King Jammy; A Better Place, where he teams up with the UK-based Stingray crew; and his latest, Sings The Bush Doctor, a tribute to the music of Peter Tosh. Though the success of these albums has brought Bushman ever-increasing global recognition, he remains a humble, down to earth figure who lives in St. Thomas with his wife and children and follows a strict ital lifestyle.

For more info, tour dates and/or to send Bushman a friend request make sure to check the websites below.