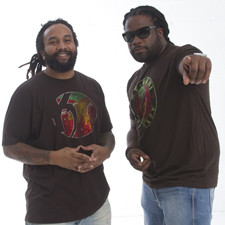 Described as “history being written,” the Reggae Revolution Tour pairs second-generation reggae royalty, Ky-Mani Marley and Gramps Morgan, for a select run of West Coast dates that will be highlighted by this headlining Reggae On The River performance.  Each performing their own material, along with a few choice collaborations, the show will kick off with Gramps Morgan, of Morgan Heritage fame, and will culminate with a set by the Grammy-nominated singer, actor, author, and humanitarian, Ky-Mani Marley.

Ky-Mani Marley is an artist with no limits.  Mixing reggae with hip hop, R&B, and rock to create a sound of his own, Ky-Mani has three albums to his credit: The Journey, which reached #7 on the Billboard Reggae Album charts in 1999; 2001’s Many More Roads, which was nominated for a Grammy for Best Reggae Album; and Radio, from 2007, which has more of hip hop feel than his previous albums and reached #1 on the Billboard Reggae Album charts. In 2009, Ky-Mani started the Love Over All Foundation which is dedicated to the educational development of the youth and distributes grants to help promote positive change in low socio-economic communities. He released his memoir, Dear Dad, on February 6, 2010, what would have been his father, Bob Marley’s, 65th birthday and has also starred in several films, including Shottas, One Love, and Haven.

Gramps Morgan is a member of world-renowned sibling band Morgan Heritage, which has released over ten albums and toured the world over, amazing thousands of fans and selling millions of copies worldwide. A burly vocalist and keyboard player, Gramps released his first solo album, 2 Sides of My Heart Volume 1, in 2009. This album featured several chart-topping singles, including Wash the Tears, and won him several prestigious awards and nominations including “Album of the Year” at the 2010 Excellence in Music Awards and a nomination for “Best Reggae Artist” at the 2010 Centric Soul Train Awards.  He is currently in the studio working on his next album, Reggae Lives, and its’ first single, The Almighty, is already riding high on global reggae charts.

For more info and tour dates make sure to check the websites below.