OFF! ANNOUNCE RELEASE OF NEW FULL LENGTH IN APRIL 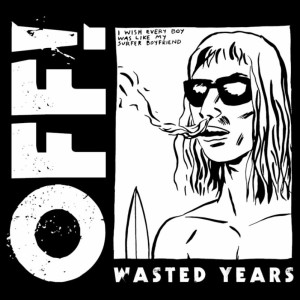 Punk/hardcore luminaries OFF! have announced the impending release of their new full length Wasted Years. Slated to arrive April 8, 2014 from Vice Records, the LP is simply the most direct and unprocessed realization of OFF!’s mission yet. In an attempt to capture the sonic embodiment of the album’s thematic darkness, the album was self-recorded live to 8-track ½” tape in the quartet’s practice space, with a minimum of overdubs and an inability to punch in (i.e. every performance is an unedited take). Recorded immediately after writing was completed, the record captures vocalist Keith Morris, guitarist Dimitri Coats, bassist Steven McDonald, and drummer Mario Rubalcaba in the act of bringing its 16 palpably visceral songs to life. Full tracklist and album art by longtime visual collaborator Raymond Pettibon (Black Flag, Sonic Youth) below.

Since forming in 2010, OFF! have boasted a relentless recording & tour itinerary that has resulted in some of the rawest, most energizing musical experiences of the new decade. Harnessing and distilling reckless freneticism to its purest essence, they’ve rediscovered the stripped down core of noise, speed, and rock & roll at the heart of punk rock that previously seemed lost forever. This brutally direct approach has resulted in the kind of glowing accolades (including rave reviews and features from Pitchfork, NPR, LA Times) that some bands spend a lifetime chasing.