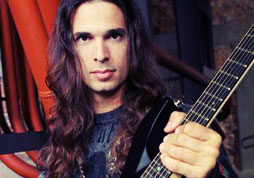 Brazilian guitarist Kiko Loureiro has been wowing rock fans with his fleet fingered fretwork, and his talents are showcased front and center on the recently-released DVD, ‘The White Balance.’ Featuring special guest performers, including Virgil Donati (Planet X, Allan Holdsworth) on drums, the DVD was filmed on June 14, 2013 at the Auditorio Ibirapuera, in São Paulo, Brazil, and incorporates all three phases of Kiko’s preferred styles – metal, progressive and Brazilian fusion music.

“Last year I got to live my dream, playing at the most awarded performance hall in Brazil,” explains Kiko, “With extraordinary friends and musicians, and got to relive many different parts of my musical history. Everyone who watches this DVD t really get to play that much! The upcoming shows will definitely have that flavor, the mixed styles, the heavy guitars, all that put together on a truly unique set!”

And U.S. fans will get a chance to see what all the accolades are about (including Guitar Player Magazine stating “This guy is supremely talented with not just impeccable technique and timing but also great composing and arranging chops”) when Kiko launches a month’s worth of live dates, from January 5-25. Most of the dates will see Kiko sharing the stage with Saving Abel, while the last show is a tribute to legendary Ozzy Osbourne/Quiet Riot guitarist Randy Rhoads.

At the Randy Rhoads performance (called “Randy Rhoads Remembered” and taking place at the Observatory in Santa Ana, CA), Kiko will be sharing the stage with such renowned guitarists as Doug Aldrich, Nuno Bettencourt, Uli Jon Roth, Ron “Bumblefoot” Thal, and Brad Gillis, among others.

January is shaping up to be an extremely busy month for Kiko Loureiro. What better way to get prepared than to feast your eyes and ears on his new rocking DVD, ‘The White Balance’!