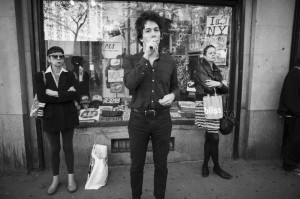 Today, Gambles pleasantly surprised us as he took to Twitter to offer his fans a free download of a new song aptly titled “Winter.” It turns out “Winter” is actually an outtake from the Rare Book Room sessions that bore his critically acclaimed debut LP, Trust. Gambles describes how the song took shape and why he chose to release it today, “I wrote this between takes while I was recording Trust at the Rare Book Room. Nicolas was changing something before we could move to the next song, and this happened in that little moment. It never made it on the record, but it feels right for today in more ways than one.”

Matthew Daniel Siskin began writing songs as Gambles in August 2012 with no goal or motive other than that the past few years needed addressing, and things that had gone unsaid for too long needed saying. The first song he released publicly was sang in a single take at the Rare Book Room with no words written. That was “Trust,” the first song he would post on his tumblr and the same song that Pitchfork somehow found only a few weeks later and presented to the world. Gambles later returned to the Rare Book Room to record the Far From Your Arms EP, which was released via his very own GMBLS imprint distributed by Secretly Canadian. Gambles has now released his debut long-player Trust via GMBLS.

Gambles is music and people, boiled down, sliced thin, and left to dry; yet it’s clear that for Matthew, it’s also everything, a life-saving perspective into events that demand to be acknowledged, registered, declared and when ready, left.

Gambles also has a few new tour dates to share which can be seen just below.