The Walking Dead Continues To Be The #1 Show On Television 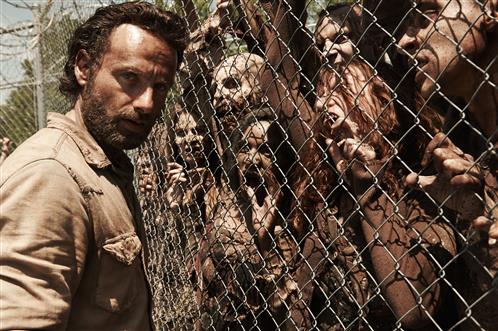 AMC’s The Walking Dead returned last night with the mid-season premiere of its fourth season, delivering 15.8 million viewers and 10.4 million adults 18-49. It was the #1 telecast for the night among adults 18-49, including the Sochi Winter Olympics. The Walking Dead continues to be the #1 show on all of television among the coveted 18-49 demographic. With time-shifted playback, last night’s premiere should exceed 20 million viewers.

“With a number of high-profile choices on television last night, for The Walking Dead to deliver record ratings is remarkable. Thanks to the fans, who have been so supportive of this show in so many ways. We share your passion for this world,” said Charlie Collier, AMC president. “Thanks also to the terrific team of writers, starting with Scott Gimple and Robert Kirkman, who with our outstanding executive producers, cast and crew pour their hearts into this series, always with the fans in mind. I speak for everyone at AMC in expressing my sincere appreciation and our shared excitement for the journey ahead. Chocolate pudding for all!”

The mid-season return of The Walking Dead also dominated TV-related Twitter activity, and was the #1 show of the night on Twitter across all cable and broadcast networks with 1.24 million show-related Tweets from 526,174 unique authors, generating a total of 68.4 million impressions, according to Nielsen SocialGuide. Twitter activity peaked at 9 pm EST with 41,011 Tweets, representing 86.6 percent of all television-related Twitter activity at that time. The Walking Dead was also the #1 program for the day in TV-related Twitter activity, with the most unique authors and total Tweets. Leading into the premiere, a live chat with The Walking Dead’s Norman Reedus helped spike show-related tweets. With fans sending in their questions to Reedus, the dedicated hashtag, #askNorman, was trending world wide on Twitter. The mid-season premiere also generated a number of simultaneous trending topics including #TheWalkingDead, TheWalkingDeadMarathon, TWD, Hershel, WalkerGotMyShoe, Michonne, Rick, Pudding, WalkingDead, TalkingDead, ItsForYou.