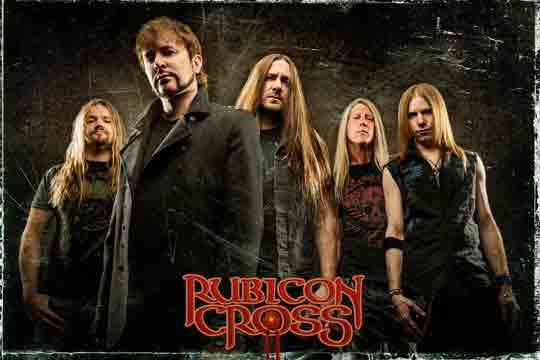 RUBICON CROSS TO RELEASE DEBUT FULL LENGTH SELF-TITLED RECORD ON INgrooves RECORDS ON MAY 19TH FIRST SINGLE AND VIDEO “BLEED WITH ME” TO DROP ON APRIL 8th, 2014

Now hailing from Chicago, C J Snare and Chris Green first met while on tour
inEurope when they shared the stage at a rock festival in Madrid.  A
closefriendship was forged through sharing a decade of life experience that
wouldultimately serve as the creative nucleus for this project.

It was clear from their very first collaboration that the songs they
werewriting needed to be released separately from their other pursuits.
Together they formed RUBICON CROSS.  With the addition of Pride/Furyon bassist
SimonFarmery (who co-wrote, “Save Me Within”), Seventh Omen drummer Robert
Behnke,and second guitarist Jeff Lerman, RUBICON CROSS became a band of
brothers,willing to tackle the music, the road, and bring life to these
songs of fight,commitment, and connection.

The lush melodic core of the songwriting is given a forceful, aggressive boost
on this record.  From the first single, “Bleed With Me” that starts just as
propulsive as it ends to “Kill Or Be Killed” that has a relentless metal drive,
RUBICON CROSS is a collection of contemporary heavy music that sits just as
comfortably next to hard rock classics as it does modern rock upstarts. “Locked
and Loaded” is featured in the Xbox360 and PS3 game “Dirt Showdown” along side
of new rock heavy-hitters Rise Against, Rival Sons and The Parlor Mob.

RUBICON CROSS was recorded at Black Dog Studios in Atlanta GA and
Snare BearStudios in Milwaukee WI, with Ken (Grand) Lanyon and C J
engineering. The albumwas mixed and mastered by award-winning,
Platinmum-selling producer / engineer,Rick Beato.  All songs were written by
C J Snare and Chris Green except “Save MeWithin” which was penned by C J
Snare, Chris Green and Simon Farmery.