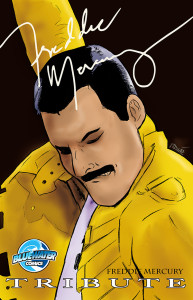 Tribute: Freddie Mercury is released this week and will be available in print & digital.

Written by Mike Lynch and Manuel Díaz there will be seven alternate exclusive covers by Michael Troy and Graham Hill.

Freddie Mercury was one of the best performers of his generation. Now read the story behind the legend. His childhood in the paradise island of Zanzibar, his exile to England, and then going on to become the front man for one of the greatest bands of all time Queen.  This special comic book is a tribute of his life and accompaniments he made to the world of music.

“Mercury’s story is a fascinating one, from his birth in Zanzibar, being forced to flee his homeland at an early age to his rise to Rock Royalty in the U K and then onto global conquest. His work has gone on to inspire generations of musicians. He will always be remembered as one of the greatest performers in music history and it was an honor to have worked on this biography”, said writer Mike Lynch.

“We also wanted to talk about the fact that Mercury suffered from the AIDS virus to try to reduce stigma,” said Davis who has HIV.

Print copies of Tribute: Freddie Mercury can be ordered for $3.99 at Comic Flea Market here: http://bit.ly/XKXzyo

The comic book will also be available digitally in Spanish.