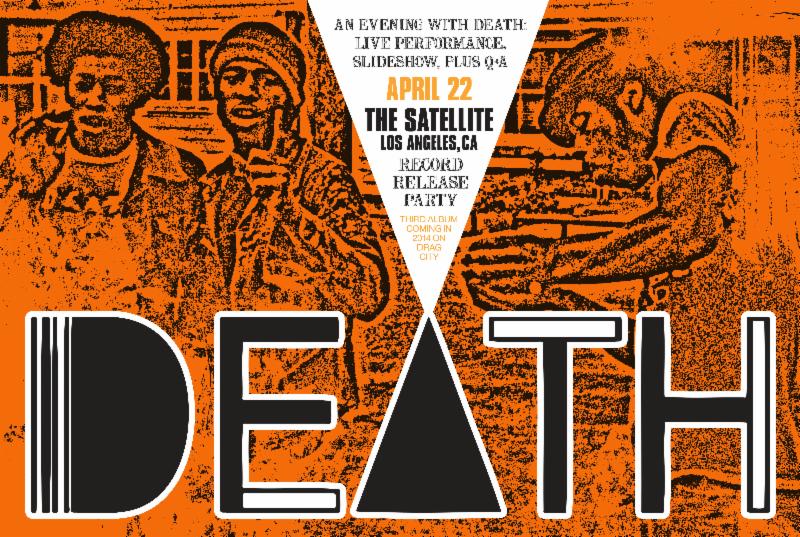 Death is proud to announce that they will appear on The Arsenio Hall Show for an interview and a performance on Monday, 4/21. Their third archival album, Death III, will be released the following day via Drag City and can be streamed via NPR First Listen. The record release show will be at The Satellite in Los Angeles, CA on 4/22. You can buy tickets to the record release show here.

Five years after the second life of Death was started with the release of their revelatory 1976 album, For the Whole World to See, Death III slams the door on the vault with a powerful set of songs that bring equal amounts of rock and ethereal soul-searching, in high-fidelity, rich bottomed, studio-grade sound. Alongside songs from 1975, 1976 and 1980, Death III contains two songs from 1992, as the Hackney brothers reconvened nearly a decade after they’d stopped playing together. Death III serves as a companion piece of sorts to the A Band Called Death documentary, tracking the band’s movement from spiritual young rockers to older and wiser, bruised-but-undefeated brothers, in pure musical terms.

David Hackney’s visual representation of Death was a triangle, where “spiritual,” “mental” and “physical” formed the three angles. With this in mind, For the Whole World to See is clearly the physical corner, with its undeniable proto-punk power; Spiritual-Mental-Physical explores the mental axis, with Death working through some of their influences, including The Beatles, Jimi Hendrix, The Who and even ELO, in their practice space. Death III is the spiritual end of the portrait, bookended by the dreamlike rock visions of David Hackney that created and propelled the band called Death.

Death III starts with David inside a deep 1975 guitar improvisation, rising up through atmospheres and prehistoric guitar murk to coalesce in jagged monster-riff-dom. The whole exercise recalls Funkadelic’s great Eddie Hazel while reflecting the pure essence of David Hackney’s guitar style. This jump-cuts perfectly five years into the future, with the funky staccato of “North Street,” which finds the band’s punkish approach at it’s most aggressive.

From there, the album moves back and forth from 1975 and ’76 (including two songs recorded at Groovesville in Detroit with the other For the Whole World to See songs) to 1980, showing the band streamlining their frenetic core and maximizing the power.

The lyrical focus of the songs “Open Road,” “We Are Only People,” and “Free” is more in the spirit/soul side of Death as heard on “Let the World Turn” and “Where Do We Go From Here???” – sensitive, searching, reflective. “We Are Only People” is an epic journey that begins with another Funkadelic-styled spoken-word moment, progressing through a spacious solo-guitar-with-harmonies section and into the inevitable rock conclusion.

Dark hues are generated by the relentless and speedy “Restlessness” while remaining at a philosophical remove, and “Free” is a heavy duo piece with Bobby and David exploring the meaning of the word. But the album’s climax is provided by a trio (once again, the triangle) of David songs, two of which hail from 1992. All three pieces together form a release of the soul of Death from it’s dark origins, building optimism upon the harsh realities they’d experienced in their lives, more relaxed without losing the spark and bite of those former times.

The unaccompanied guitar instrumental “First Snowfall in Detroit,” is David Hackney at his most soulful, which gives way to “We’re Gonna Make It,” first featured as an emotional climax to the documentary and no less powerful here. With these songs, Death III pays final tribute to David Hackney’s thoroughly original voice and vision, now stilled, but captured forever as a part of the remarkable story of Death.