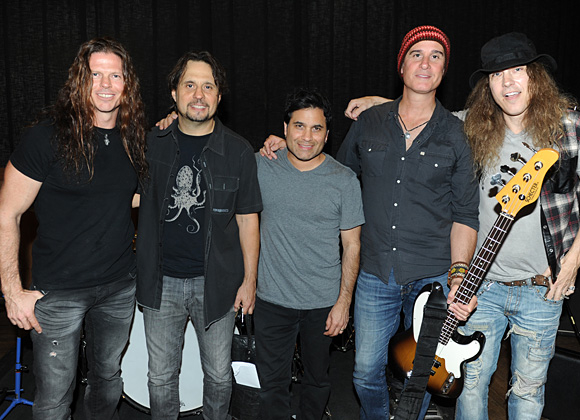 Veteran photographer Kevin Estrada’s Rockers Against Trafficking benefit to help
raise awareness of human trafficking this past April 11th at Paladino’s in
Tarzana, CA (sponsored by Monster Energy) was an amazing success. All of the proceeds from the show will be used to rebuild the lives of these young victims
with housing, medical assistance, legal aid, and job placement, and the donations will also be used to build and set up border monitoring stations between countries that are known for human trafficking.

All proceeds will be divided between CAST LA (www.castla.org) and Tiny Hands International (www.tinyhandsinternational.org).

There were also a few impromptu live auctions on stage offering a very rare guitar
pick owned and used by Dimebag Darrell, and a pair of drumsticks – signed on
stage by a sweaty Dave Lombardo just as he finished his set. Performance highlights included a blistering set by Helmet, a gritty and fire fueled debut performance by Randy Piper’s F-4, and a mind-blowing all star set by Chris Broderick (Megadeth), Dave Lombardo (Slayer/Philm), Robert DeLeo (Stone Temple
Pilots), and Keith St. John (Montrose).

The heaviness was balanced out with touching acoustic moments by Burton C. Bell of Fear Factory and an uplifting acoustic set by Gonzo and Phil Sandoval of Armored Saint.  To Humans, Spiders and Snakes and Edge Of Paradise and Ann Boleyn’s Hellion set helped round out the night and kept the crowd energized.

While the music was outstanding, the audience continued to be educated throughout the evening about the dangers of the human trafficking epidemic. One portion of the evening that really hit home was an eye opening and heart breaking speech by a Burbank, CA mother whose daughter was kidnapped and forced into the world of human trafficking.

The show was also dedicated to two missing girls, Ali and Savannah. The loudest audience cheer of the entire event was when Estrada announced from the stage, “Hopefully the next Rockers Against Trafficking concert will be to celebrate Ali and Savannah as they are rescued and reunited with their families.”

“Besides being a photographer, I am a dad – that is my top priority in life,” adds Estrada. “I am so thankful to all the artists that donated their time and talents.  The event was a huge success, I am very happy with the outcome.  We have so many great supporters behind us and we gained many more that evening.  Rockers Against Trafficking is here to stay.”