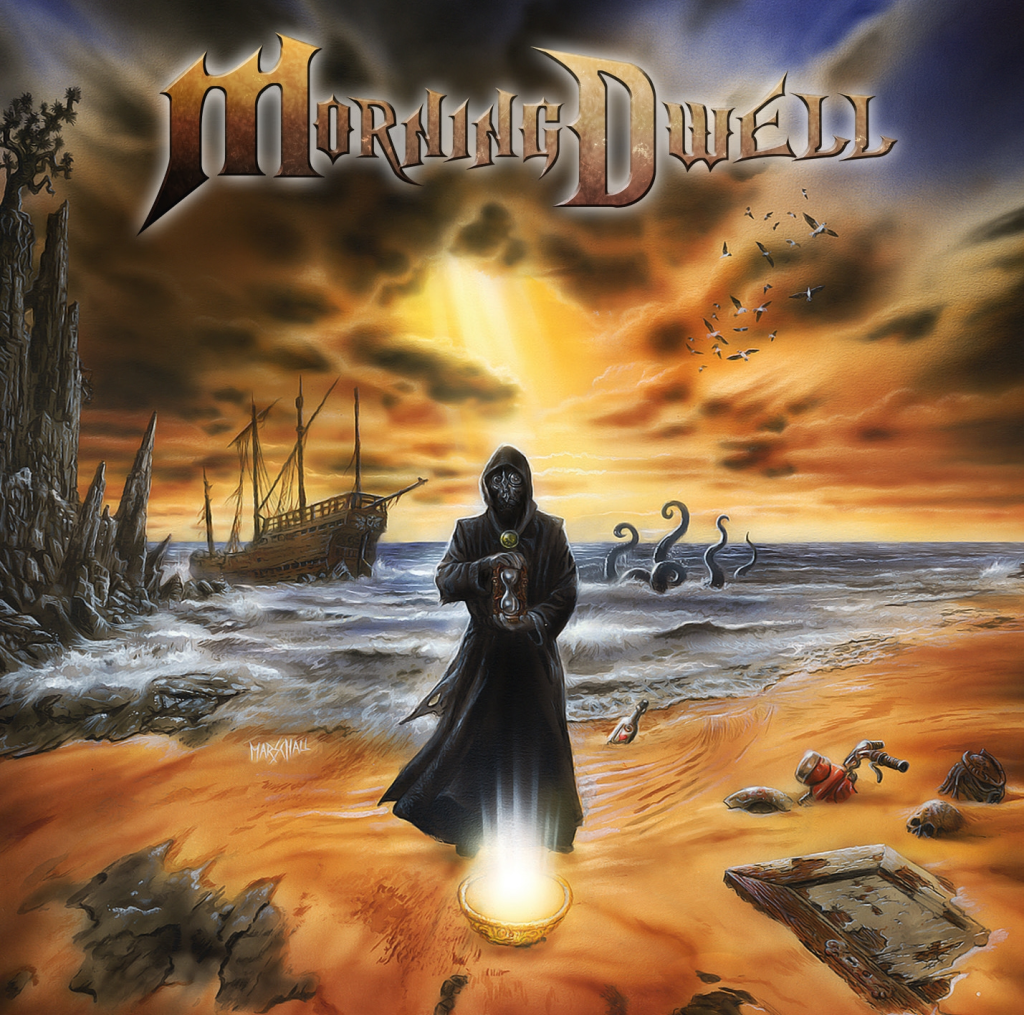 Classic power metal from Sweden in the vein of Helloween – Keeper Of The Seven Keys Era, Rhapsody, Blind Guardian and ReinXeed. Produced by Frippe Eliasson & Petter Hjerpe, Mixed by CJ Grimmark (Narnia, Rob Rock). Artwork is done by no other than Andreas Marshall who has done famous artworks for bands like Hammerfall, Kreator, Stratovatious, Blind Guardian.

Morning Dwell was at first a one man band project by Petter Hjerpe. It all started in a small town deep in the woods of Sweden. Petter Hjerpe was born 1985 and when he was about 14 years old he heard another Swedish metal-band: HammerFall and the album Legacy of kings(1998). He had never heard this kind of metal before and became curious and brought home the Legacy of kings-album and showed his father, who also have played in many bands in his early years, and he told his son that this sounded a little bit like a band he used listen a lot to for many years ago. Then Hans (Petter’s father) showed Petter a vinyl record with a band called Helloween….and the album was Keeper of the seven keys part 2. He went down to his fathers “music-room” were he kept his vinyl player along with his guitars. Petter turned on the vinyl album and heard the two first songs on the albm: Invitation and Eagle fly free. While holding the album cover in his hands and listened to this two songs Petter felt as a new world opened before him. A new experience of music that he never felt before. From that day he started to search for that kind of music and asked friends if they knew more music that sounded like Helloween.

Many teenagers in this small town listened to metal music so many friends showed each other new bands they’ve heard. Then it all exploded! Edguy, Rhapsody, HammerFall and Stratovarius were biggest Power Metal bands people listened to at that time. Petter also listened a lot to Freedom Call, Heavenly and Gamma Ray.

Petter started to write music before he could play any instrument at all He had a friend named Ramiar Raissi who was a great keyboard player and a classmate. The first demo Petter recorded was called Tumania and was an instrumental album recorded on Ramiars well sounded KORG keyboard. Ramiar played every instrument on keyboard and Petter told him how it should sound. Now the year is 2000 and that year Petter started playing drums, keyboards and guitars. His father had an computer with a recording program which Petter started to learn how to use. He wrote music and became better and better while years passed by.

2003 was the first time Petter used the name Morning Dwell for a project. That demo contained five songs and one of them were Forever and ever which appears on this debut album.

Years passed by and Petter continued to record music at home and had a couple of friends who also played guitars and drums so they created much music a lot together. One of them were Ulf Zetterman(Guitars in Morning Dwell).

Petter continued to record, play in different projects and coverbands and did this for many years. One of the projects was something Martin Erneström(Bass in Morning Dwell) came up with. It was a school project Martin had and needed someone to play drums and someone to play guitars on a cover of Helloween’s Ride the sky. Petter played drums and this was the first time he met Michel Barréra (Guitar Morning Dwell). Michel was a friend to Martin. This was back in 2009.

Later Petter got in touch with was Samuel Olsson on Keyboard. They played together as a band in a cabaret in Petter’s hometown.

The year is now early 2013 and Petter thought he should make a 10-year anniversary album of songs he had written over the years. So he did. He re-recorded some old songs and wrote new as well and mixed them all up into a demo which he called Morning Dwell-Forever and ever Demo 2013. Petter Played every instrument by himself and also sang the vocals. This demo was at first meant to be given to friends and family just for fun. One day he thought “Why not give it a try and send it to a record label!?”

So he did and it only took a couple of days and Christian Liljegren called him up. A contract was written and Petter were overwhelmed! But then Petter said to Christian that he didn’t have a band! So Petter called friends and asked them what they thought of joining a band.

At first Petter couldn’t find any drummer and didn’t want to play drums and sing at the same time! He just wanted to sing. Then Christian offered a drummer of his band Golden Resurrection and Tommy Johansson’s ReinXeed. Alfred Fridhagen became a member after he finished the recording for Morning Dwell This is the line-up of Morning Dwell.

Morning Dwell is now releasing their debut album and are ready to take on the world some great Power Metal!