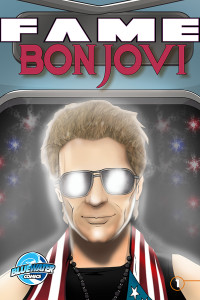 Bluewater Productions announced the third release comic book biography for “Rock Music Month” featuring the lives of famous rock musicians. Bon Jovi is the recent musician who will be illustrated be part of the popular biography series.

Fame: Bon Jovi is released on April 29nd in print as well as digital. For “Rock Music Month” Bluewater this month has so far released bio comic books on both Kurt Cobain and Freddie Mercury in their Tribute series.

Written and drawn by Jayfri Hashim, the story of Bon Jovi is being retold in this comic book. This story will feature New Jersey’s favorite musicians in the rock-band Bon Jovi, who survived three decades of trials and tribulation. Bluewater goes back to the early years of the band and how frontman Jon Bon Jovi gets a record deal and has kept the band going for decades. The classic rags to riches story, what kept the band going strong and will it be the end of the crossroad?… it will all be told.

“We get a lot of requests on subjects to tell their stories in this unique medium. Bon Jovi has always been at the top of the list when people mention to us who they would like to see a comic book of”, says publisher Darren G. Davis.

The comic book is available for pre-order on iTunes: http://bit.ly/1m1W6EK

Print copies of Fame: Bon Jovi can be ordered for $3.99 at Comic Flea Market here: http://bit.ly/XKXzyo

Bluewater has focused on other music icons in the past such as Paul McCartney, Prince, John Lennon, Jimi Hendrix, Jim Morrison, Keith Richards and more. A new graphic novel featuring these musicians will be out in June called Icons of Rock and Rock.