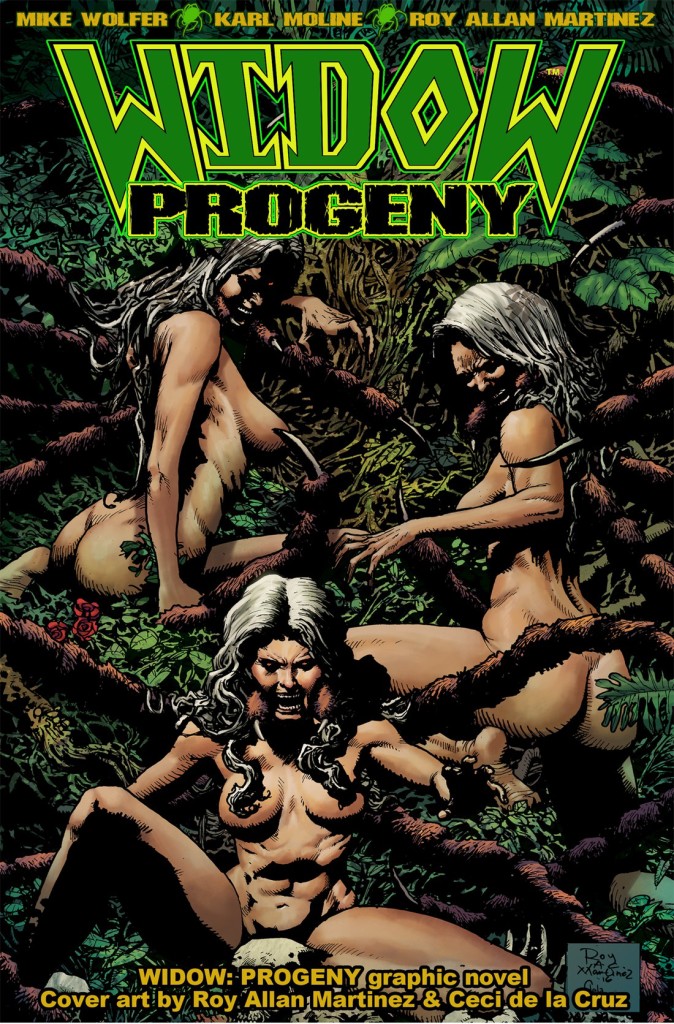 This July, Mike Wolfer Entertainment will be publishing the first new “Widow” mini-series in 19 years, titled “Widow: Progeny.” Created in 1992, “Widow” was writer and artist Wolfer’s first foray into the horror genre, and it was a path that would later include his notable work on “Night of the Living Dead,” “Friday the 13th,” “Lady Death,” “Crossed: Badlands,” and a host of other horror properties. But as he gained recognition for his more high-profile projects, Wolfer’s “Widow” character maintained a huge cult following, despite the fact that the series hasn’t seen print in almost two decades.

“Widow” tells the tale of Emma, the unfortunate recipient of genetic modification to infuse her human DNA with that of an arachnid. The unfortunate side-effect is that she gained the instincts and cravings of a spider, along with nightmarish, physical transformations that reveal her true arachnid nature. Prior to taking the “Widow” series to publisher Avatar Press in 1997, Wolfer self-published the first issue of a “Widow” spin-off series, titled “Widow: Progeny.”

Written by Wolfer and illustrated by Karl Moline, the three-issue series was never completed after the move to Avatar. Due to the recent surge of interest in Wolfer’s older works, he has decided that now is the perfect time to finally reveal the true horror of the previously uncompleted “Widow: Progeny.”

“‘Progeny’ is one of those stories that I always wished had seen print, and now it’s finally happening,” explains Wolfer. “Back in ’97, at the height of the Ground Zero Comics ‘Widow’ series, I was ready to expand the ‘Widow’ mythos into new territory, but the move to Avatar, and a bunch of new priorities, left ‘Progeny’ unfinished and forgotten.” The original “Widow” stories focused on Emma, the tragic heroine who carries within her a “spider virus,” which can be sexually transmitted and infect- and genetically alter- those who contract it.

“With ‘Progeny,’ I show how a single encounter with Emma is like the match that starts a wildfire. In fact, Emma does not appear in ‘Progeny,’ but her legacy is the impetus for the story.” Illustrated in the stark contrasts of black and white which was the hallmark of independent comics publishing in the 1990s, “Progeny” tells the tale of Katy, a shipwreck survivor on a Caribbean island overrun by half-human, half-spider mutations. When a U.S. Coast Guard helicopter rescue team crashes on the island, Katy must lead the survivors as they attempt to defend themselves from the terrors that lurk in the island’s dark interior.

Issue #1 of the three-issue, monthly “Widow: Progeny” mini-series will hit comic shop shelves in July, distributed by Diamond Comic Distributors. Art for issues #2 and #3 is being supplied by Roy Allan Martinez. “Because I’m so busy drawing ‘Daughters of the Dark Oracle,’ which I also self-publish, I just don’t have the time to illustrate the two uncompleted issues, but when I saw Roy’s intricate, dark, and downright creepy art style, I knew that he was the perfect person to take over the series.” Rounding out the creative team is Natalie Jane, who provides lettering and production assistance, and Ceci de la Cruz, whose digital color work graces not only every WIDOW: PROGENY cover, but every full color cover, art print, and pin-up published by Mike Wolfer Entertainment.

Funding for the series will be secured through a 30-day Kickstarter campaign that will launch February 15th, 2016 at 9:00 PM EST, with a funding goal of $6000. Backer rewards will include graphic novels, trading cards, Oracle cards, t-shirts, art prints, autographed comic collections, Widow action figures, and original art commissions. The rewards and rewards levels can be previewed at http://tinyurl.com/h6mzsrv.