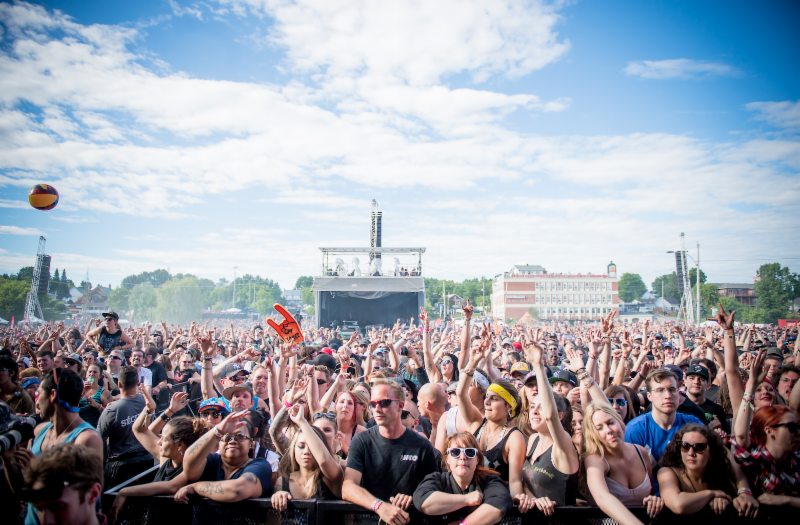 ROCKFEST RETURNS TO ITS ROOTS FOR ITS 11TH EDITION

The Outaouais Rock team is pleased to announce the complete lineup for the 11th edition of Amnesia Rockfest, the largest rock festival in Canada, which will take place from June 23 to 26, 2016, at the Montebello Marina in Western Quebec. This year’s schedule is: Rockfest’s St-Jean celebration on June 23, main days on June 24 and 25, and camping from June 23 to 26. Rockfest will be celebrating its 11th anniversary by bringing back several of the most requested bands by the festival-goers to Montebello. This year’s festival will feature more than 125 rock, metal, punk, hardcore and hip hop performers! The complete lineup is available at www.amnesiarockfest.com

LINEUP
Among this year’s headliners, California’s punk-rock band Blink-182 is back by popular demand with a whole new show, after having attracted the biggest crowd in the history of Rockfest during the 2014 edition. Chicago’s punk rock band Rise Against is also back; they had the biggest crowd of the 2013 edition. Legendary alternative rock group Jane’s Addiction will be playing in Quebec for the first time in 20 years.
This year’s festival will also feature: party animals Limp Bizkit, making a rare appearance in Quebec, legendary rapper Ice Cube, alternative metal pioneers Korn, Ontario’s punk rock bands Billy Talent and Sum 41, England’s Bring Me The Horizon, Florida’s A Day To Remember, as well as heavy metal bands Lamb of God and Anthrax. They will be performing along with Twisted Sister (farewell tour and last show in Canada), Puscifer (TOOL’s Maynard James Keenan’s band, their first show in Quebec), NOFX (performing their album Punk In Drublic), The Used (performing their album In Love and Death), At The Drive-In (reunion show), Underoath (reunion show), Blink-182’s Travis Barker (solo show), NOFX’s Fat Mike performing as Cokie The Clown (world-exclusive solo show) and many more.
As always, punk-rock will be at the forefront: Lagwagon (performing their album Hoss), Millencolin, Streetlight Manifesto, Against Me!, Strung Out, Guttermouth, No Use For A Name (special tribute), Leftover Crack, Wizo and many more.  Joining them are several punk and hardcore legends such as Flag (former Black Flag members, performing songs from the now-defunct band), The Adicts, Misfits, Dead Kennedys, Steve Ignorant of Crass, D.O.A., Turbonegro and GG Allin (special tribute).
For metal fans, Sepultura, Sodom (first show in Canada in 10 years), D.R.I. (first show in Canada in 20 years), Cannibal Corpse, Korpiklaani, Max & Igor Cavalera Back To ‘Roots’ (performing Sepultura’s Roots album), Corrosion Of Conformity, The Black Dahlia Murder, The Faceless and Poison The Well (reunion show) will also be performing.
Several now-defunct Quebec bands will temporarily reunite exclusively for Amnesia Rockfest, including Vulgaires Machins, Kermess, Raid, Démence and Yelo Molo. Festival regulars Grimskunk, Despised Icon, The Sainte Catherines (performing Dancing for Decadence), Voivod, Anonymus and BARF will be back this year.  In addition, Québec Redneck Bluegrass Project, Bob Bissonnette, Gorguts and WD-40 will be performing for the first time at Rockfest.
Finally, two major French alternative rock bands will be playing the Rockfest’s St-Jean: Ludwig Von 88 (reunion show and only Canadian date) and Les Ramoneurs de Menhirs, Bérurier Noir’s Loran’s group.  This evening of Francophone music will feature Mononc’ Serge, Les Colocs (special tribute), a tribute to Quebec rock and Montebello’s own Les Chiens Sales and La Tuque Bleue.
TICKETING
Tickets are now on sale at www.amnesiarockfest.com and at Amnesia stores. Once again this year, festival weekend passes will be sold at very reasonable rates: $120 (plus fees and taxes), which comes out to less than a dollar per band! New this year: festival-goers can pay for their order in five instalments. With all of the excitement generated so far, two sold-out presales and this year’s solid lineup, the team is confident that the festival will be a sold-out affair for a fourth consecutive year. VIP packages are also available.
NEW VIP CAMPGROUND
For the 2016 edition of the festival, the VIP campground will be totally revamped to offer a unique experience to festival-goers. Again this year, several public transit options will be available, as well as an area for RV camping.
ABOUT ROCKFEST
Founded in 2005 by Alex Martel, “a kid” from Montebello who wanted to transform his hometown into a rock paradise, Amnesia Rockfest quickly became the largest rock music festival in Canada and the largest in the Outaouais region thanks to its impressive lineup, its supercharged atmosphere, its unique camping experience and its affordable prices. Rockfest is set in the heart of the countryside, on the shores of the Outaouais River between Montreal and Ottawa, and each year welcomes thousands of rockers from all over the world. Visit us at www.amnesiarockfest.com and follow us on Facebook: facebook.com/amnesiarockfest
ABOUT AMNESIA
Amnesia is a Quebec retailer specializing in urban clothes, shoes and accessories for skateboard, snowboard and music enthusiasts.
www.amnesiashop.com