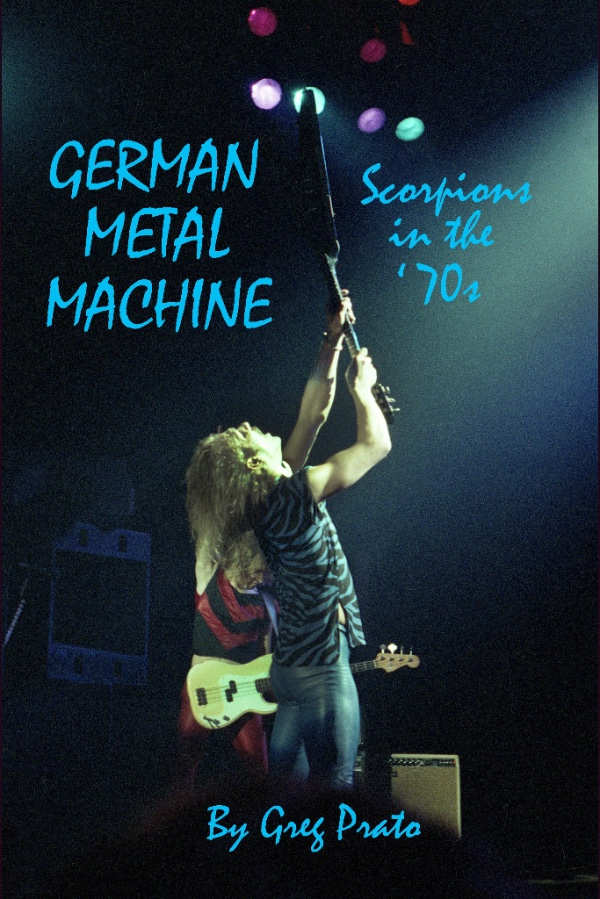 NEW BOOK, ‘GERMAN METAL MACHINE: SCORPIONS IN THE ’70s,’ TELLS THE STORY OF INFLUENTIAL ERA OF THE BAND

Few rock bands were as successful as the Scorpions by the mid ’80s – headlining arenas/stadiums worldwide, scoring two mega-selling albums (the platinum-certified ‘Blackout’ and the triple-platinum certified ‘Love at First Sting’) and two hit singles/videos (“No One Like You” and “Rock You Like a Hurricane”). But what quite a few newcomers to the band didn’t realize was that the Scorpions had been regularly recording music since 1972, and that throughout the remainder of the decade, featured two guitarists (Michael Schenker and Uli Jon Roth) at separate points that are considered legendary amongst the heavy metal masses. And while such albums as ‘Lonesome Crow,’ ‘Fly to the Rainbow,’ ‘In Trance,’ ‘Virgin Killer,’ ‘Taken by Force,’ ‘Tokyo Tapes,’ and ‘Lovedrive’ did not come close to obtaining the commercial success of the aforementioned ’80s era efforts, they inspired and influenced countless renowned musicians.

‘German Metal Machine: Scorpions in the ’70s’ is the first-ever book to focus solely on this period of the band. Interviews include such former members as Michael Schenker, Uli Jon Roth, Francis Buchholz, and Herman Rarebell, longtime Scorpions producer Dieter Dierks, plus members of other bands that are major admirers, including KK Downing (Judas Priest), Billy Corgan (Smashing Pumpkins), Joe Satriani, Tom Hamilton (Aerosmith), David Ellefson (Megadeth), Alex Skolnick (Testament), and Eddie Trunk (‘That Metal Show’), among many others, while Kirk Hammett (Metallica) provides a foreword.

Greg Prato is a Long Island, New York-based journalist, who has written for Rolling Stone, Songfacts, and Vintage Guitar, and has authored such books as ‘Survival of the Fittest: Heavy Metal in the 1990’s,’ ‘Iron Maiden: ’80 ’81,’ ‘The Eric Carr Story,’ and ‘Touched by Magic: The Tommy Bolin Story.’ ‘German Metal Machine’ is his 19th book overall.